Stitch!
Stitch & Ai
A Poem Is...
It's a Small World: The Animated Series (cameo)

Sole guardian of Stitch and his "cousins"

Her ʻohana, having friends, Elvis Presley, Regis Philbin, hula dancing, horror/sci-fi movies, B-movie monsters, her doll Scrump, anything that can be considered weird, the color orange

Bad luck, rules, clowns, broccoli, haunted houses, Mertle, Gantu (formerly), being yelled at, Stitch's destructive behavior, Nani scolding her, being too young for something, being considered a freak, being doubted, being alienated by her friends, being told that she's crazy, being told that she'll never be like her mother, being alone, the color pink, being reminded that she's an orphan, being told she is not a normal person, her doll Scrump getting ripped

"ʻOhana means family, and family means no one gets left behind or forgotten."

Lilo Pelekai is the female protagonist of Disney's 2002 animated feature film, Lilo & Stitch, and most of its franchise. She is a young, orphaned Hawaiian girl who lives on the island of Kauai with her older sister, Nani and her extended yet unconventional family of alien visitors marooned on Earth. 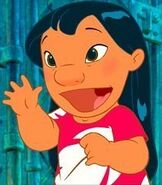 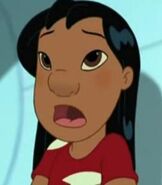 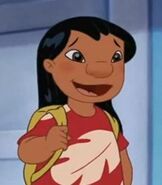 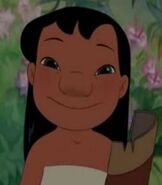 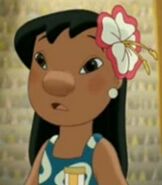 Add a photo to this gallery
Retrieved from "https://duchess-productions.fandom.com/wiki/Lilo?oldid=41106"
Community content is available under CC-BY-SA unless otherwise noted.